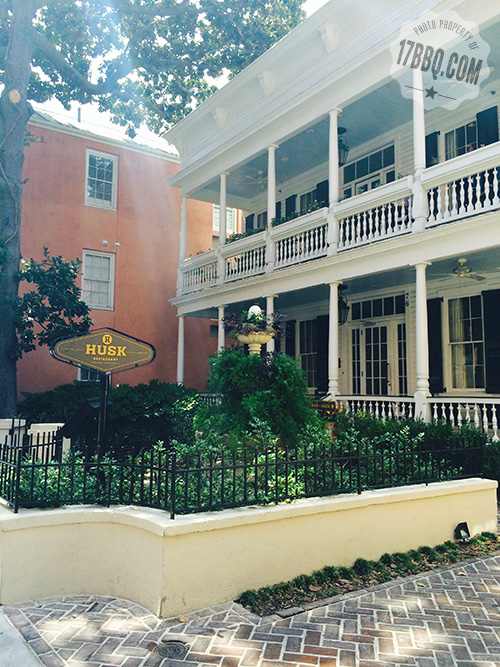 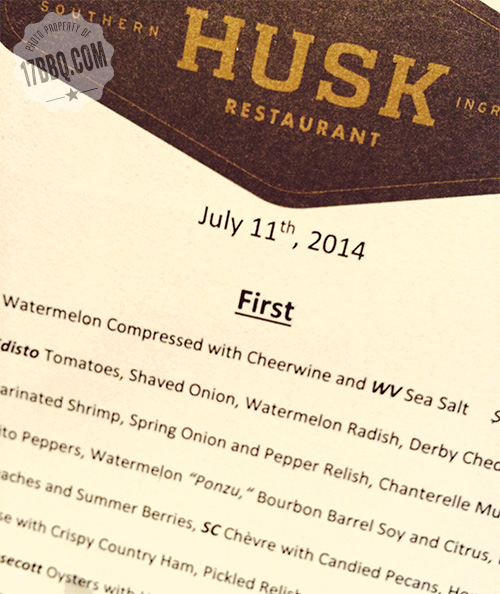 I’ve been fortunate to have had some amazing VIP dining experiences, but never one quite like this. 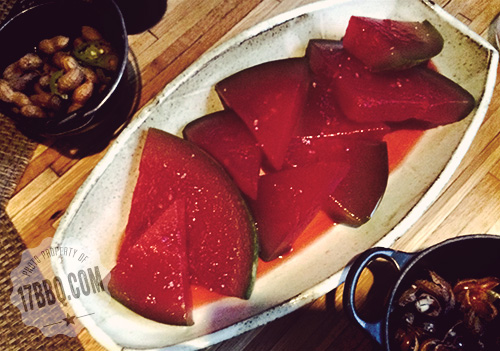 Roderick Weaver and Darryl Csicsila kept the libations fresh and full as the meal commenced. First course: Cheerwine-compressed watermelon, with an additional bottle of Cheerwine poured over the fruit table side. So fresh and delicious. 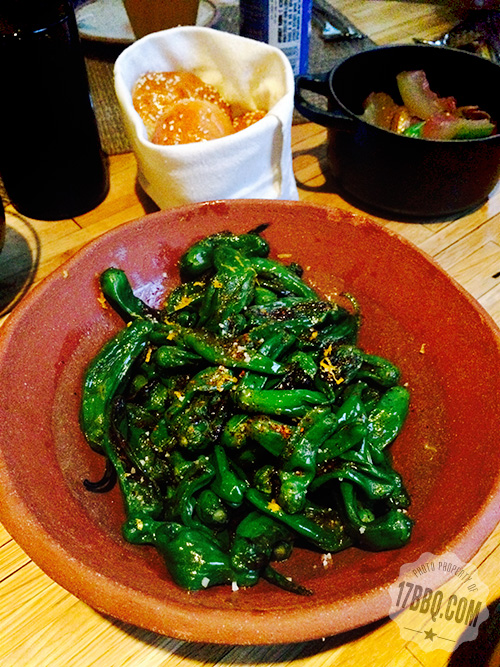 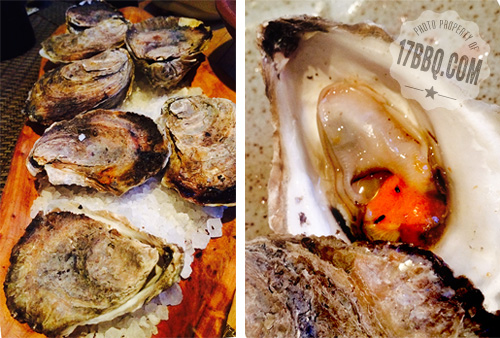 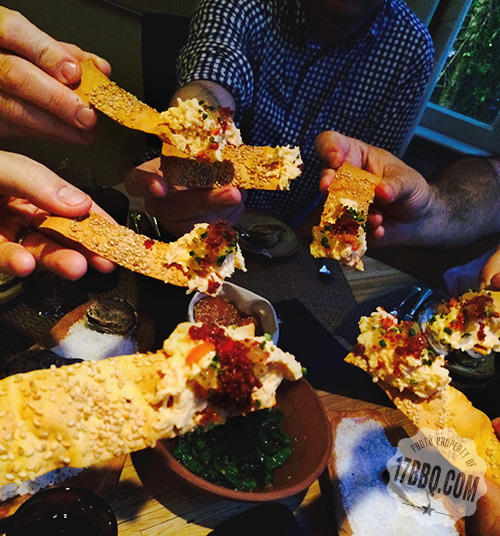 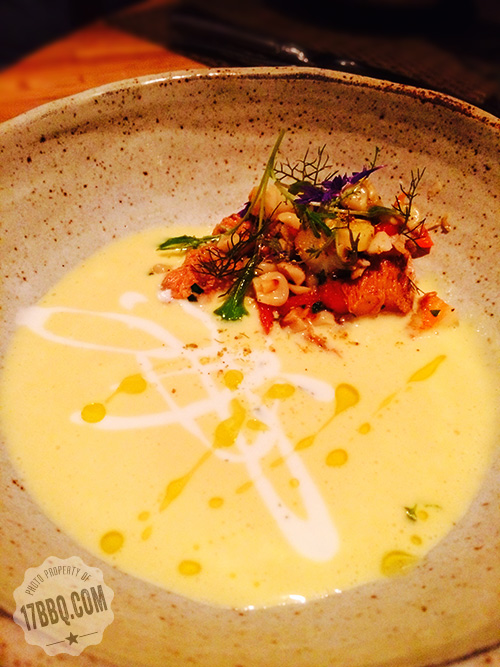 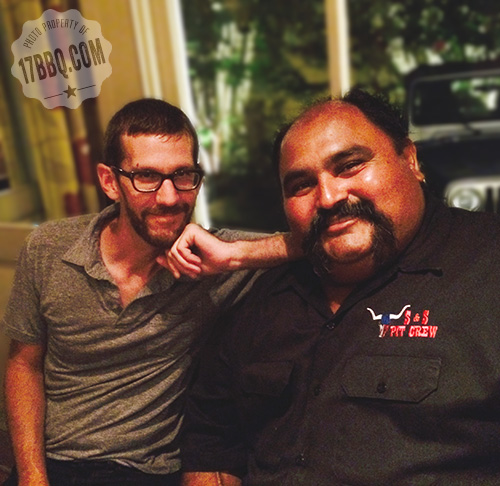 John Lewis, pitmaster of La Barbecue in Austin, and Robert Sierra. Really special to share the meal with these two. 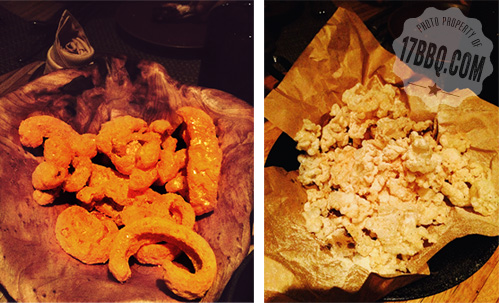 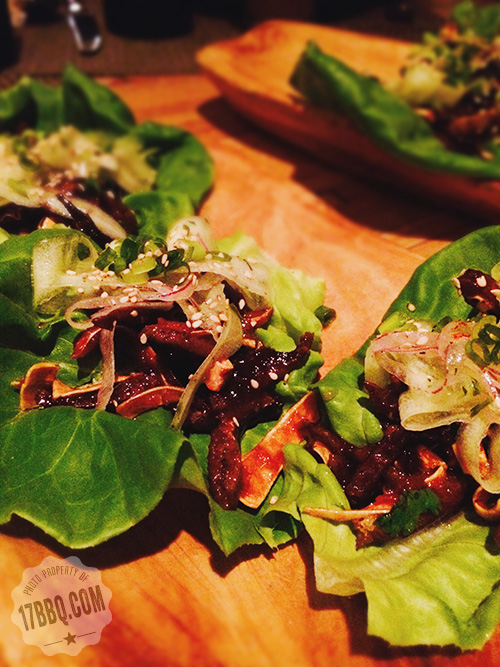 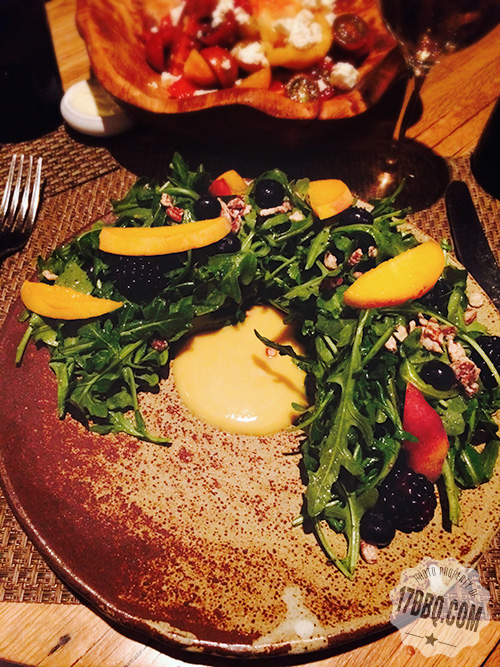 Everyone ordered an entree, in addition to the march of dishes that kept streaming from the kitchen. I opted for this fresh arugula, South Carolina peaches and summer berries, South Carolina chèvre with candied pecans, and honey vinaigrette. 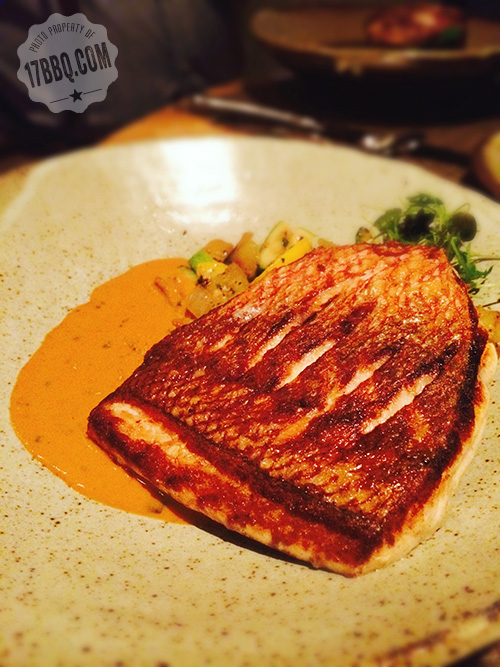 One of the entreés:  Atlantic snapper, summer squash and zucchini, Japanese eggplant with sweet onion, and shrimp “bisque.” 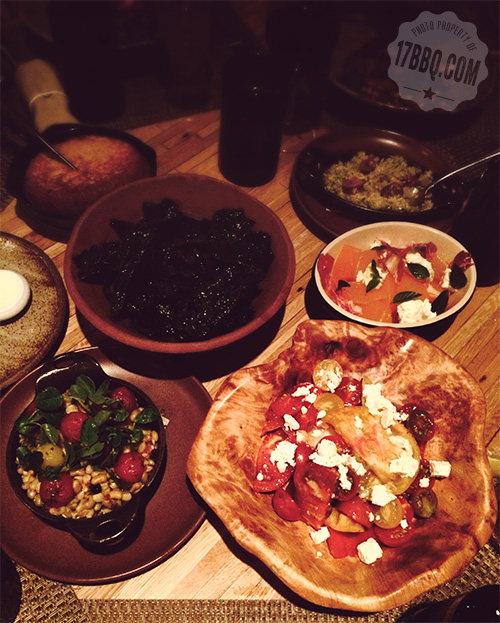 The vegetables are one of my favorite things about Husk. Here we have kale chips, compressed melon with Shiso honey, house made ricotta and Surryano ham, the freshest sliced heirloom tomatoes, goat’s milk feta, pickled garlic, Texas olive oil, bourbon smoked salt, Jackson Wonder butterbeans with preserved tomatoes and scallions, and, barely visible in the upper corner, Carolina gold rice with sausage. And a skillet of cornbread with Allan Benton’s Tennessee Bacon So, so good.

Apparently there were three more courses planned, but they could see that we could not even begin to finish the entrees. 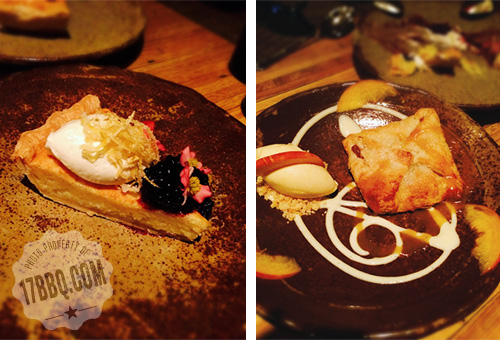 There is, however, always room for a little dessert. Buttermilk chess pie with blackberry sauce and candied zest, and a fresh peach turnover with bourbon anglaise and peach sherbet. Served with seven forks. 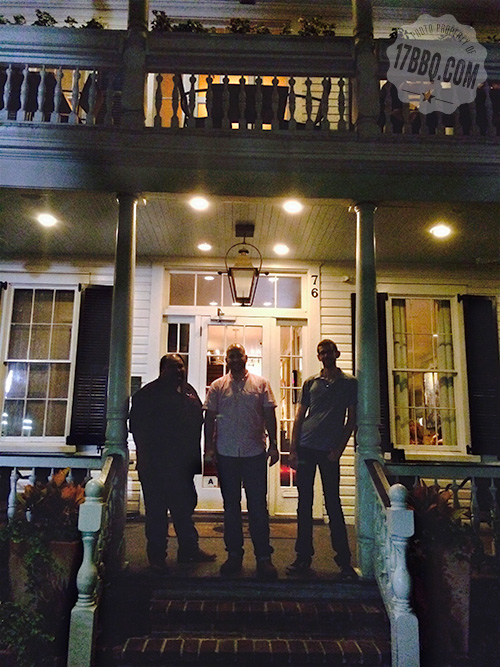 Robert Sierra, Robert Lerma, and John Lewis, in repose on the porch after supper. 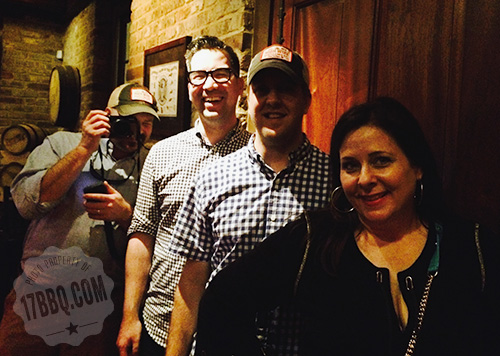 Robert Donovan {with the camera}, Robert Strickland, Eric Doksa, and me. Cocktails in the bar before heading out to the Blind Tiger. 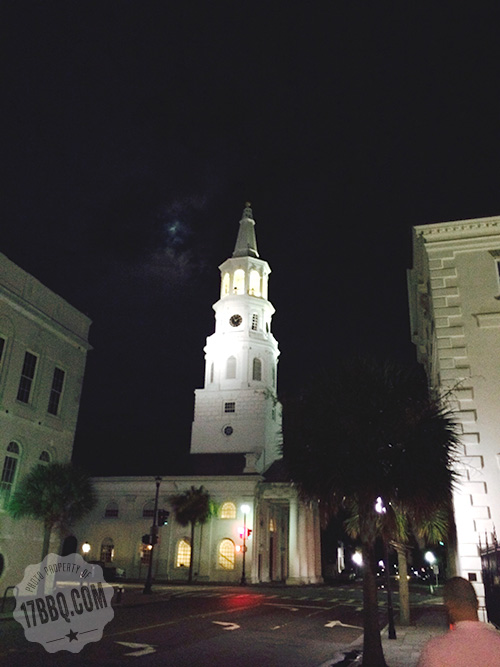 A moonlight stroll along Meeting Street in the Holy City was the perfect end to the evening. This intersection, at Meeting and Broad Streets, is known as the Four Corners of Law, with St. Michael’s Episcopal Church, a United States Post Office, Federal Courthouse, and county courthouse at each corner, representing federal, state, local and ecclesiastical law. 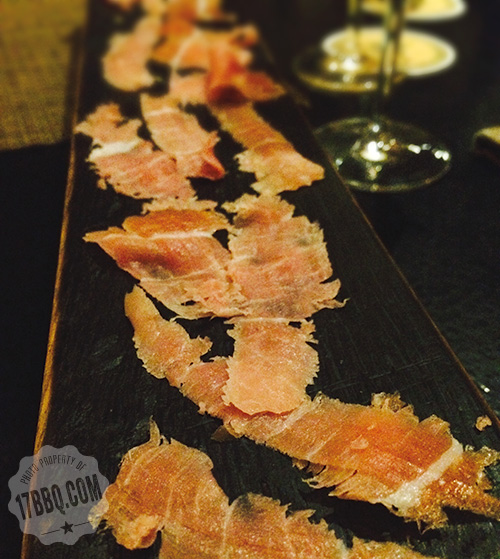 Sunday night, after the barbecue event, a few of us headed back to the bar, housed in the historic brick building next to the restaurant. We were greeted with a barrel stave loaded with salty pieces of freshly sliced Edwards Virginia ham. 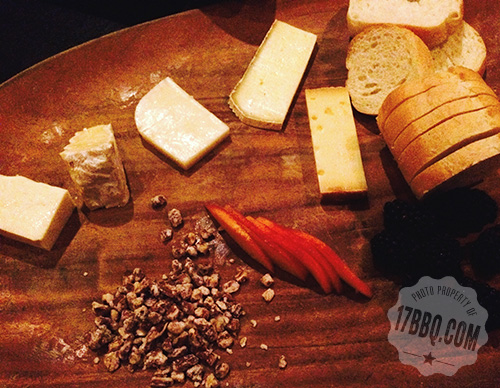 We toasted the success of the day with prosecco while enjoying this beautiful platter of cheese, fruit and nuts. 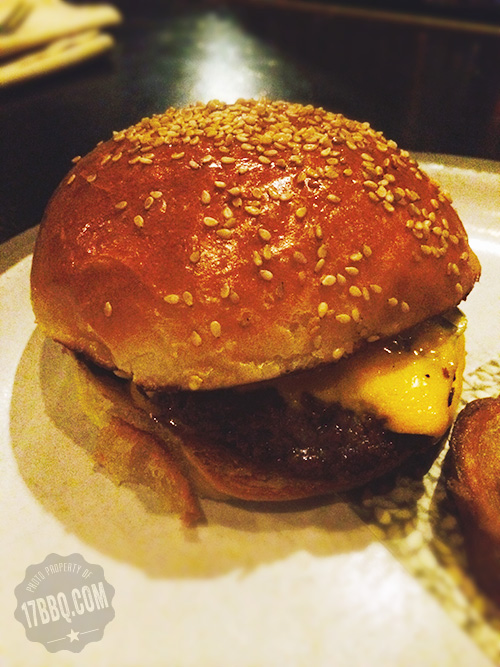 And we split a delicious cheeseburger. 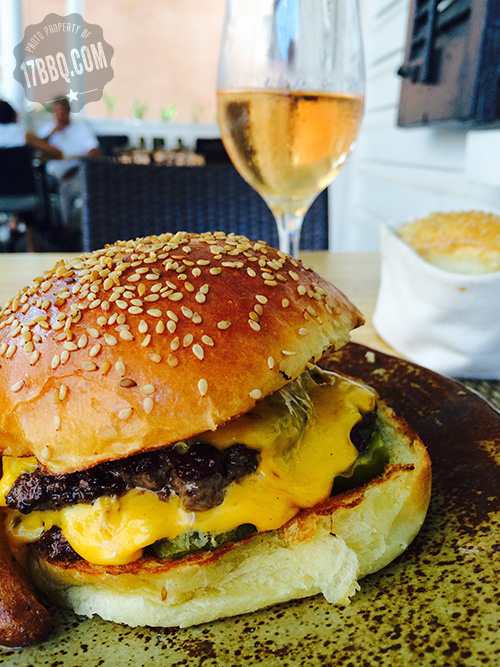 On Monday, after a morning of meetings and real estating, we relaxed on the porch with a burger and rosé. And another go at that peach turnover. 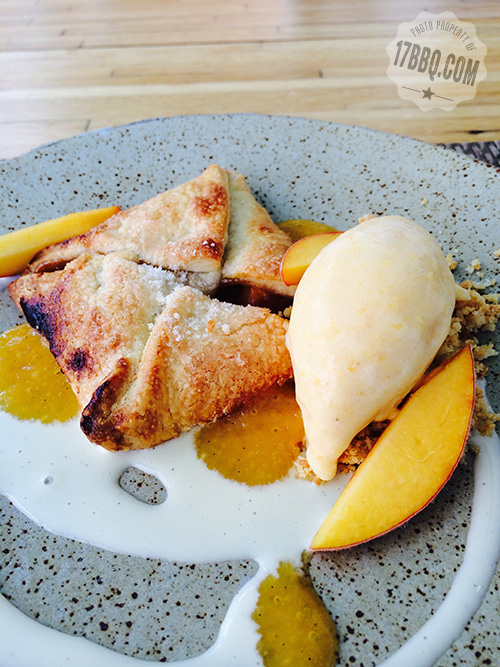 The porch is really a magical place to dine. Fresh air, a little sultry, so relaxing. I was amused as I listened to at least five carriage tours passing by on the street below, each giving a different {and sometimes slightly erroneous} description of Husk and Sean Brock. Note to Melany Mullens – you might consider giving those companies a script!

Heartfelt gratitude to Dan Latimer, Travis Grimes, Roderick Weaver, Darryl Csicsila, Sean Brock, Eric Doksa, and Robert Donovan for engineering such a memorable evening. It was one for the books, indeed. And thanks to the the Husk crew for repeated warm welcomes throughout my stay. I’m already planning my return. 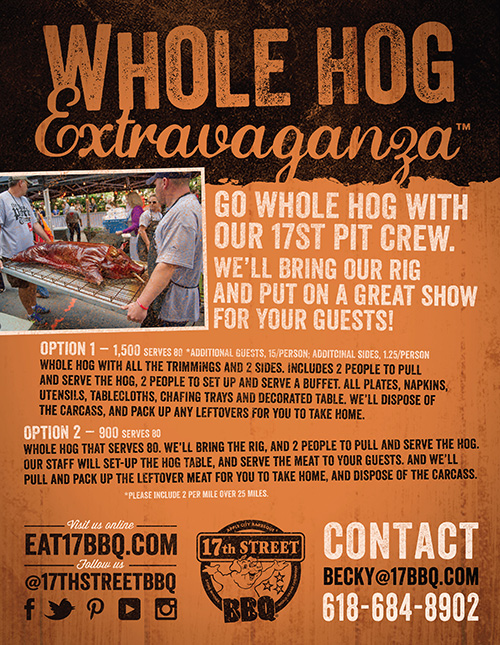 Here are the details for whole hog catering from 17th Street. We’ve taken this show on the road all over the midwest and even to New York City. Book your event today. We’d love to help you go whole hog!